Yale University Library’s Fortunoff Video Archive for Holocaust Testimonies has established a temporary European outreach office at headquarters of the Vienna Wiesenthal Institute for Holocaust Studies (VWI). The purpose of the office is to develop networks and joint projects with European researchers and institutions, and to increase awareness of Yale’s unique collection of 4,400 video testimonies of Holocaust survivors, witnesses, and liberators.

The Fortunoff Archive has worked closely with VWI for years.  Many of the archive’s researchers already hail from universities, museums and cultural institutions in Europe, so when VWI offered to provide office space, it was an opportunity not to be missed. Stephen Naron, the archive’s director, made the move with his family in August to establish the new office.

Being able to connect and network in person, without long flights or time zone changes, is already having an impact, Naron said. He recently presented on the collection in Lublin, Poland, attended a book launch in Munich, Germany, and received an invitation to present on the collection in Thessaloniki, Greece. Working with Fortunoff staff members in New Haven, he is supporting four major conferences that will feature Fortunoff materials over the next twelve months: two in Poland, one in Israel, and a concert based on the archive’s Songs from Testimonies project in Lithuania. “Each of these events is a valuable opportunity to encourage use of the collection,” Naron said. 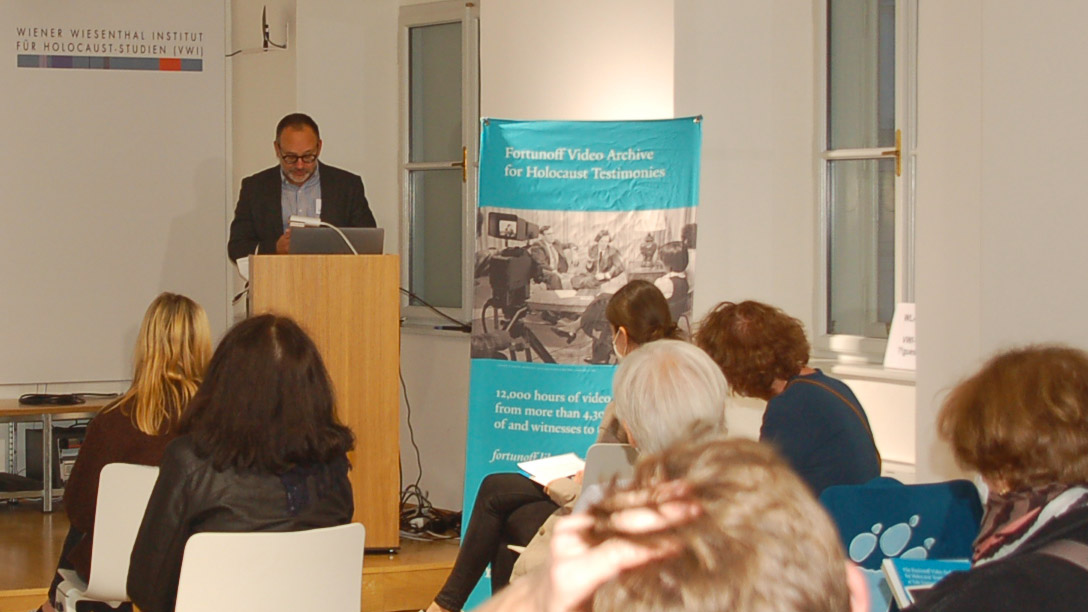 The new location makes it easier for the archive to participate in, and contribute to, the European Holocaust Research Infrastructure, an umbrella organization of approximately 20 organizations focused on advancing research about the Holocaust. “Much of the most important Holocaust research is being conducted here in Europe, for obvious reasons,” Naron said. “This is where local scholars are grappling with their country’s role during World War II.”

Thanks to advances in technology, the Fortunoff collection is now available at more than 140 online sites. “With digitization of the entire collection complete, we now have the unique possibility of returning this international collection to the countries where most of these testimonies originated,” Naron said. With many Holocaust survivors gone, the work of keeping the memories of the witnesses alive is more critical than ever. The office in Vienna offers one more way to project the witnesses’ voices to a larger audience.

The Fortunoff Archive has been actively recording testimonies since 1979 when it started as a grassroots effort in New Haven. Survivor and Nobel laureate Elie Wiesel, a supporter of the archive from its inception, spoke at the archive’s twentieth anniversary celebration about the “imperative of testimony.” He said, “hate is growing, fanaticism is invading” and he warned that we must “not allow fanaticism to become a seductive power…or hatred to become a policy of state.”

The archive’s original mission stated that the testimonies would be “essential for the instruction of young adults and for community-wide education.” Four decades later, the collection continues to transform how the history of the Holocaust is studied and written around the world.