The editor of the New Yale Book of Quotations claims Yale Library’s “magnificent” print holdings and extensive online resources have enabled him to document the origins of 13,000 famous quotations “to an extent undreamed-of by past quotation book compilers.” Edited by Fred Shapiro, the new volume was published earlier this month by Yale University Press. It is a revised and updated version of the Yale Book of Quotations published in 2006.

By day, Shapiro is a librarian at Yale’s Lillian Goldman Law Library. By night, he is a researcher who mines library collections to reveal the origins of phrases that have become established in the canon of American and world quotations. His passion for literature and history was instilled at an early age. When he was 10 years old, his father brought home a copy of Bartlett’s Quotations from the Strand bookstore in Manhattan. This sparked his lifelong interest in quotations. He went on to become a contributor to the Oxford English Dictionary, and later, the compiler of the Oxford Dictionary of American Legal Quotations.

Making full use of the Yale Library’s print and digital collections, Shapiro gathered information from a vast range of literary and historical sources, as well as from popular culture, science, social science, politics, and technology. With much of Yale’s 15-million-strong print collection being located in open stacks, Shapiro was able to access materials in a way that would not be possible in other institutions, such as the British Library or Library of Congress, where the stacks are closed.

One of Shapiro’s most engrossing discoveries was the origin of the famous Serenity Prayer: “God grant me the serenity to accept the things I cannot change, courage to change the things I can, and wisdom to know the difference.” The prayer is typically attributed to the theologian and political philosopher Reinhold Niebuhr, whose daughter actually wrote an entire book revolving around his supposedly composing the prayer in 1943. But Shapiro’s research at the Yale Divinity Library revealed that a YWCA official named Winnifred Wygal introduced the Serenity Prayer in the periodical The Woman’s Press in 1933. Shapiro notes that this is a striking example of a phenomenon he has observed where quotations originated by unsung women get credited to prominent men.

Between the original and current editions, Shapiro has noticed a shift in his research methods. When working on the 2006 volume, he spent more time physically in the library as he needed to work closely with older literary editions; but also, digital resources were fewer and less-developed. With the new edition, he drew far more extensively from the library’s digital collections of historical texts which he says are at a level “few other institutions can offer.” 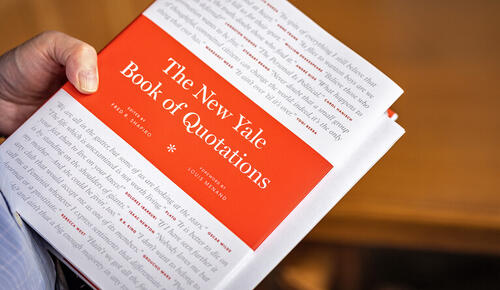 For instance, in a search of the Eighteenth-Century Collections Online database, he discovered that Benjamin Franklin’s famous line of 1789 about nothing being certain but death and taxes originally appeared in a 1716 play by Christopher Bullock, who wrote, “’Tis impossible to be sure of anything but death and taxes.”

The library’s vast collection of online historical newspapers proved to be particularly useful in gathering information about quotations.

As the library’s digital collections continue to expand and improve, the value of interacting with the physical collections still has tremendous value and can offer an unrivaled experience. Shapiro discovered the proverb, “An army marches on its stomach” in the Beinecke Rare Book and Manuscript Library’s copy of Thomas Carlyle’s History of Friedrich II of Prussia. The quote was ascribed to Frederick the Great and not Napoleon, as was commonly thought. Shapiro describes the “bibliographic thrill” of holding the Carlyle volume in his hands, which was actually the author’s own copy.

Shapiro’s research for the two quotation books has spanned 34 years. He said that there are “few, if any, other institutions on earth where I could have accomplished what was needed.” Based on the strength and originality of Shapiro’s research, a New York Times Magazine review of the first edition said the book had earned “a place on the quotation shelf next to Bartlett’s and Oxford’s.”

Details about the New Yale Book of Quotations, can be found on the Yale University Press website.