A summer fellowship in Manuscripts and Archives gave Charlotte Keathley ’22 a new view of Yale history, new pathways to primary sources, and the opportunity to co-curate an online exhibition on coeducation. Keathley worked with University Archivist Michael Lotstein this past summer to produce a new online exhibition, “We thought of ourselves as architects”: Coeducation and the Yale Campus, 1968-1973.

The project evolved from a physical exhibit Lotstein curated in Sterling Memorial Library in 2019 as part of the 50WomenAtYale150 celebrations. Urged by a visitor to make the work permanent, Lotstein began to conceptualize an online version while working from home during the pandemic. Thanks to a gift from J. Frederick Berg, Jr. ’66—a member of the University Library Council and long-time supporter of the library—a summer fellowship was established for an undergraduate student to work on the project. Keathley, an American Studies major, was chosen and spent five weeks working with Lotstein to select records and photographs from the archives and decide how to present the information in an online format.

For Keathley, the fellowship “confirmed for me how much I enjoy working with primary source material. There was something uniquely satisfying about getting to work with a high volume of documents from a single period — getting to know not only the key characters and points of tension, but also the paper and ink of a particular historical moment.”

In part due to limitations on digitizing large-format materials, the online exhibition was never going to be a digital replica of the 2019 exhibition. Instead, Lotstein and Keathley chose to examine the coeducation era through the lens of campus buildings and spaces. Their exhibition draws on records, photographs, and audio-visual materials from the archives to reveal the challenges the first women undergraduates faced in creating a community for themselves on a campus conceived of, and built for, male students. 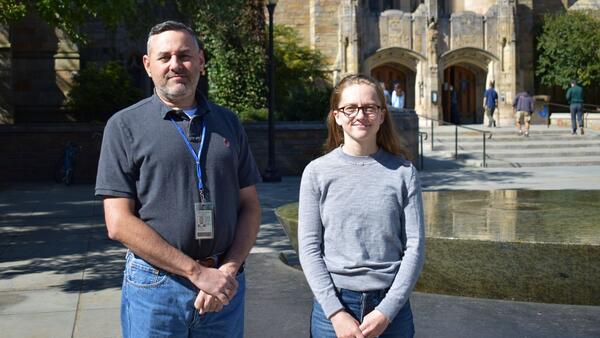 As a student in 2021, Keathley didn’t start out feeling a strong connection to the history of Yale or to the struggles of the women who had gone before. But as she mined the collections in Manuscripts and Archives, she began to understand how different life used to be for women at the university. “I came across fond accounts of individual friendships, small groups, and specific gathering spaces, but few students reported a general sense of cohesion and solidarity among the first cohort of women undergraduates,” she said.

Keathley noticed that the word “scattered” surfaced again and again in descriptions of the physical and social map of women at Yale from 1969 to 1973. She found a quote from a WFSB television reporter in September, 1969, describing the arrival of women at Yale in architectural language: “The ivy halls and longstanding ivied traditions here at Yale University are crumbling. For the first time since the college was founded in seventeen-hundred-and-one, they’re registering women undergraduates.”

Along with discovering Yale history, she developed new research skills. “If I was looking for archival objects relating to a particular building, group, or controversy Mike would encourage me to think widely and flexibly about different ways of reaching the information. When I got stuck, he would encourage me to mentally map the archive in a new way—for example, to try thinking in terms of key administrative figures rather than buildings, to see if a new ‘mapping’ might yield new results.”

For Lotstein, Keathley’s enthusiasm and creativity “became the nucleus through which the exhibit was ultimately built.” The five weeks they spent working on the exhibition were “some of the most challenging and the most fun I’ve had during my tenure at Yale,” he said.

Lotstein and Keathley will give online lectures about the exhibition on Thursday, Oct. 14, at 6:30 pm and Wednesday, Nov. 17, at 6:30 pm in collaboration with the Yale Alumni Association. All are welcome. Questions may be emailed in advance to archives@yale.edu.