Video: What Are Dogs Doing in Eighteenth-Century Art?

What are dogs doing in eighteenth-century art?

They’re looking—and making us look, too.

According to historian Thomas W. Laqueur, the dogs often act as surrogates for us viewers, directing our line of vision to follow the dog’s gaze within the painted scene. Dogs also sometimes act as doppelgängers for the painters, who see from the dog’s point of view. “Evolution has created in this Canis familiaris a species that looks into our eyes and we into theirs,” Laqueur says.

In the 25th Lewis Walpole Library Lecture, Laqueur illustrates his thesis with works from the library. In a portrait of Sir Robert Walpole and Catherine Shorter by John Giles Eccardt, three attentive hunting dogs keep watch on their owners.  In “A Party at Sir Horace Mann’s in Florence,” by Thomas Patchl, a sleeping animal ignores the human goings-on. In “Buy a trap, a rat trap, buy my trap,” a satirical print by Thomas Rowlandson and Henri Merke, an alert tavern dog barks an alarm. 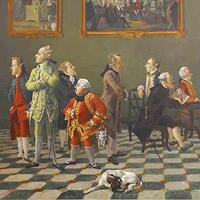 Even beyond Britain and the eighteenth century, dogs play significant roles in many works of art—whether as grounding elements within a composition or as observers of human activity or as partners. “Dogs are in museums in greater numbers—and doing more different things with humans, gods, and among themselves—than any other animal,” Laqueur says.  There are dogs in all three of Albrecht Dürer’s master prints, for example, and dogs appear in the works of Brueghal, Correggio, Goya, Titian, Velasquez, Veronese, and other Western artists—and in prehistoric cave art and on objects of classical antiquity.

Why are dogs omnipresent in art and in such great numbers? Laqueur points to the unique relationship of humans with dogs since at least the Ice Age. As the first domesticated animal by about 10,000 years, dogs are “uncannily attuned to our gestures, they’re interested in us, in the spaces we inhabit, and what we do—including hunting, gardening, walking, hanging around, and pretty much everything else,” he says.

Laqueur is the Helen Fawcett Distinguished Professor of History, Emeritus at the University of California, Berkeley. His lecture “What Are Dogs Doing in Eighteenth-Century British Art?” was hosted by Yale Library’s Lewis Walpole Library, an internationally recognized research collection in the field of eighteenth-century studies, at the Yale Center for British Art in October 2022. Nicole Bouché, W. S. Lewis Librarian and executive director of the library, and Mark Peterson, Edmund S. Morgan Professor of History, delivered the introductory remarks.